Baron Walter Louis Davis is an American former professional basketball player. He is a two-time NBA All-Star. He was drafted with the third overall pick in the 1999 NBA draft by the Charlotte Hornets.

Davis selected UCLA as his school of choice, so that he could play in front of his family and friends. In 1998, Davis was named the Pac-10 Freshman of the Year and made the Third Team All-America his sophomore year in 1999.[4]

In Davis’ two years at UCLA, he averaged 13.6 points and 5.1 assists for the Bruins.

Davis was the third pick in the 1999 NBA draft by the Charlotte Hornets. In Davis’ first year, he backed up Eddie Jones and David Wesley, as the Hornets lost in the first round of the playoffs to the 76ers in four games. 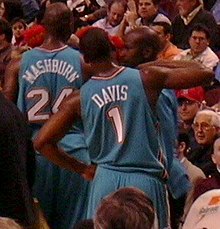 Davis saw better success the following year, as his averages in points, assists, steals and minutes per game all increased and he started all 82 games for the Hornets. Davis is credited with making the longest shot in NBA history at the Bradley Center on February 17, 2001, when he buried an 89-foot shot with 0.7 seconds remaining in the third quarter against the Milwaukee Bucks.[6]

The next season, Davis again started all 82 games while averaging 18 points and 8.5 assists per game. He was also selected for the 2002 NBA All-Star Game. The Hornets made the playoffs with Davis for the third time in as many years.

In the summer of 2002, the Hornets relocated from Charlotte, North Carolina, to New Orleans. In the New Orleans Hornets‘ inaugural season, Davis suffered multiple injuries that limited him to just 50 games. He was still able to lead the Hornets back to the playoffs.The following season saw a similar result, injuries limited Davis to 67 games and the Hornets were ousted in the first round of the playoffs.

The Hornets made the playoffs in each of Davis’ five years with the team. He played for the US national team in the 2002 FIBA World Championship.[8] 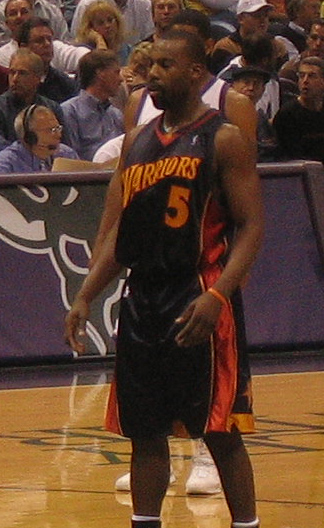 On February 24, 2005, Davis was traded from the Hornets to the Golden State Warriors . The move created one of the more potent backcourts in the NBA with Davis and star guard Jason Richardson. It also saw Davis’ return to California, where he had craved to return since his college days at UCLA.

After two seasons in which the Warriors underachieved under coach Mike Montgomery, the Warriors hired former coach Don Nelson for the 2006–07 season. His high-scoring offensive system was designed to fit Davis’s up-tempo style. Although Davis suffered through knee soreness and underwent surgery during the season, he still led the Warriors to their first playoff appearance since 1994. 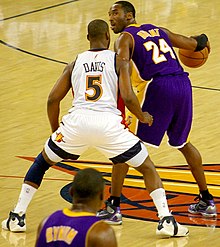 Davis’ first year with the Clippers was marked with a series of injuries and disappointments, as the Clippers struggled to a 19–63 record in which Davis was only able to play 65 games.

On February 24, 2011, Davis was traded to the Cleveland Cavaliers . This trade to Cleveland marked a reunion between Davis and former coach Byron Scott, to which Davis was quoted as saying “I know we’re together for a reason.

On December 19, 2011, Davis signed a one-year contract with the New York Knicks, choosing New York over the Lakers and Heat who also expressed interest in signing Davis.[35] At the time of the signing, Davis had a herniated disk in his back.[33]