Matthew Montgomery Barkley is an American football quarterback for the Arizona Cardinals of the National Football League. He played college football at USC, and was drafted by the Philadelphia Eagles in the fourth round of the 2013 NFL Draft.

Matthew Montgomery Barkley (born September 8, 1990) is an American football quarterback for the Arizona Cardinals of the National Football League (NFL). He played college football at USC, and was drafted by the Philadelphia Eagles in the fourth round of the 2013 NFL Draft. Barkley has also played for the Chicago Bears, and San Francisco 49ers.

Carroll named Barkley the starter for the 2009 season opener against San Jose State. He is the first

true freshman quarterback to ever start an opener for the Trojans, and the first true freshman to start the opener for a preseason top-five team since Rick Leach did it for No. 3 Michigan in 1975.[24][25]

Barkley began 2011 by setting the USC single-game record for completions with 34 against Minnesota.[42] On October 1, against Arizona, he passed for a USC single-game record for 468 yards.[43] On November 4, he passed for a USC single-game record for touchdowns in a game with 6, against the Colorado Buffaloes, one of the two additions to the Pac-12 in its inaugural season; the game was the first against Colorado since 2002.[44] He had previously tied the single-game touchdown record three times, sharing it with Rodney Peete, Carson Palmer, Matt Leinart and Mark Sanchez. On November 26, against the UCLA Bruins, he tied the single-game touchdown record again in a 50–0 shutout of the Bruins.[45]  Over the 2011 season, Barkley accumulated 39 touchdowns, an all-time Pac-12 record, and helped end the season with a 10–2 record.[46][47] Barkley had the 6th most votes for the Heisman Trophy.[48] He finished with a 39–7 touchdown-to-interception ratio while completing 69.1% of his passes. He won the 2011 CFPA National Performer of the Year Trophy with his record breaking season.[49] 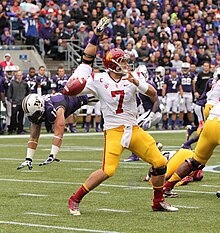 Going into his senior season, Barkley was widely considered a favorite to win the Heisman Trophy.[51][52] At the beginning of the season, USC was ranked #1 in the preseason poll, but a 21–14 loss to then-#21 Stanford ended USC’s potential BCS national championship run.[53] USC then went on to lose 5 games that year, including a late-season loss to rival UCLA for the first time in six years.[54] Matt Barkley was knocked out of that game by UCLA’s Anthony Barr with a shoulder separating hit, thus ending his regular season abruptly. On December 27, 2012, head coach Lane Kiffin announced Barkley wouldn’t play in the Sun Bowl because of his shoulder injury, effectively ending his college football career.[55]

The Philadelphia Eagles selected Barkley in the fourth round (98th overall) of the 2013 NFL Draft.[64]

The Eagles traded Barkley to the Arizona Cardinals for a conditional seventh-round pick in the 2016 NFL Draft on September 4, 2015. The terms said that he needed to be on the roster for 6 games, which were fulfilled on October 17, 2015.[67] On September 3, 2016, Barkley was released by the Cardinals.[68]

Following an injury to the Bears’ backup quarterback Brian Hoyer , Barkley ended the 2016 season with eight touchdown passes and 14 interceptions.[79] Of his 216 pass attempts, 89 went for a first down (41.2 percent), the second-highest percentage in the NFL behind the Atlanta Falcons‘ Matt Ryan (44.6).[80]

On November 13, 2017, he signed with the Cardinals due to Drew Stanton possibly missing playing time as a result of a knee sprain.[84] However, Barkley was inactive for the entire season.[85]