Matthew Stephen Leinart is a former American football quarterback who now works as a studio analyst for Fox Sports’ college football coverage. He played college football at the University of Southern California from 2001 to 2005.

Leinart attended the University of Southern California, where he played for coach Pete Carroll‘s USC Trojans football team from 2001 to 2005. He redshirted in 2001.

In 2003, Leinart and the Trojans won their final eight games and finished the regular season 11–1 and ranked No. 1 in the AP and coaches’ polls. The Trojans went to the Rose Bowl and played University of Michigan. Leinart was named the Rose Bowl MVP after he went 23-of-34 for 327 yards, throwing three touchdowns and catching a touchdown of his own. In 13 starts, Leinart was 255 for 402 for 3,556 yards and 38 touchdowns with nine interceptions. He finished sixth in the Heisman voting.

The Trojans started Leinart’s junior season (2004) with victories in their first three games. On September 25, the Trojans played Stanford. After Stanford took a 28–17 halftime lead, Leinart sparked the offense with a 51-yard pass to Steve Smith and scored on a one-yard sneak to cut the Cardinal lead to four points. Leinart and the Trojans were able to take the lead on a LenDale White rushing touchdown and held on for the victory, 31–28. Leinart completed 24 of 30 passes.

In what many had considered one of the more competitive Heisman races, Leinart became the sixth USC player to claim the Heisman Trophy. 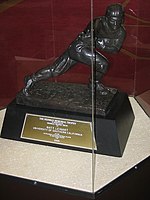 In 2004, USC went wire-to-wire at No. 1 in the polls and earned a bid to the BCS title game at the Orange Bowl against Oklahoma, which was also 12–0. A dream matchup on paper (including White vs. Leinart, which was to be the first time two Heisman winners would play against each other), the Orange Bowl turned out to be a rout, as Leinart threw for five touchdown passes on 18-for-35 passing and 332 yards to lead the Trojans to a 55–19 victory. Leinart received Orange Bowl MVP honors and the Trojans claimed their first BCS national championship and second straight No. 1 finish in the AP, extending their winning streak to 22 games.

The 2005 Trojans again had a perfect 12–0 regular season. Against Notre Dame, Leinart threw for a career-high 400 yards. Leinart was again invited to New York for the Heisman ceremony along with teammate Reggie Bush and Texas quarterback Vince Young. As a former Heisman winner, Leinart cast his first-place vote for Bush, and ended up third in the voting behind Bush.[15]

The Trojans advanced to the Rose Bowl to face Vince Young and #2 Texas in the BCS title game. The title game was considered another “dream matchup.” Leinart himself had a great game, going 29-of-40 for a touchdown and 365 yards. The Trojans lost for the first time in 35 games, and Leinart for just the second time in his 39 career starts. After graduation, Leinart’s #11 jersey was retired at USC.[16]

Leinart spent four seasons with the Cardinals, primarily as backup for veteran Kurt Warner, whom he was supposed to succeed as starter

In a November 26 game, he set an NFL rookie record with 405 passing yards in a loss to the 6-10 Minnesota Vikings. His quarterback rating was 74.0. He suffered a sprained left shoulder (throwing arm) in a week 16 win over the San Francisco 49ers. In 11 starts, Leinart threw for 2,547 yards and 11 touchdowns. He finished the season with a 4–7 record.

In Leinart’s second season with Arizona, he started five games, completed 53.6% of his passes (60/112) and threw for 647 yards, 5.8 yards per attempt, two touchdowns and four interceptions. His passer rating was 61.9. He averaged 129 yards and 0.4 touchdowns per start.

On September 6, 2010, the NFL announced that Leinart signed a one-year contract to back up Matt Schaub with the Houston Texans. Since Schaub played all 16 games, Leinart did not play during the 2010 season. During the 2011 offseason, despite speculation that he would sign with the Seattle Seahawks, who were coached by Leinart’s college coach Pete Carroll, and compete for a starting job,[21][22] Leinart ultimately agreed to return to Houston as a backup for the 2011 season.

Leinart signed with the Oakland Raiders on May 1, 2012, as the back-up to his former college teammate, Carson Palmer.[25] After Palmer suffered an injury in Week 16, Leinart and Terrelle Pryor split first-team reps.[26] Pryor ended up getting the start in Week 17 and Leinart was not re-signed by the Raiders the following offseason.

After injuries to quarterbacks EJ Manuel (knee surgery) and Kevin Kolb (concussion), the Bills decided to sign Leinart on August 25, 2013.[27] Leinart and Thad Lewis (who was brought in on the same day through a trade) would compete for the fourth-string quarterback job behind undrafted rookie Jeff Tuel. Lewis won the competition, and Leinart was released by the team on August 30, 2013.[28]