Richard Francis Dennis Barry III (born March 28, 1944) is an American retired professional basketball player who played in both the ABA and NBA. Named one of the 50 Greatest Players in history by the NBA, Barry is the only player to lead the NCAA, ABA, and NBA in scoring for an individual season. He was known for his unorthodox but effective underhand free throw shooting technique, and at the time of his retirement in 1980, his .900 free throw percentage ranked first in NBA history.

In Rick Barry’s first season in the NBA with the Warriors, the team improved from 17 to 35 victories. In the All-Star Game one season later, Barry erupted for 38 points as the West team stunned the East team, which featured Wilt Chamberlain, Oscar Robertson, Bill Russell and head coach Red Auerbach among other all-time greats. Later that season, Barry and company extended the 76ers, the team is considered to be one of the greatest in basketball history to six highly competitive games in the NBA Finals.

Because of his slender physical build and remarkable quickness and instincts, Barry was nicknamed the “Miami Greyhound” by longtime San Francisco broadcaster Bill King.  The 6’7″ Barry not only won the NBA Rookie of the Year Award after averaging 25.7 points and 10.6 rebounds per game in the 1965–66 season, he was named to the All-NBA First Team. The following year, he won the 1967 NBA All-Star Game MVP award with a 38-point outburst and led the NBA in scoring with a 35.6 point per game average.  Rick is one of only four players to average 35 or points for a season.

Teamed with star center Nate Thurmond in San Francisco, Barry helped take the Warriors to the 1967 NBA Finals, which they lost to the Philadelphia 76ers in six games. Including a 55-point outburst in Game 3, Barry averaged 40.8 points per game in the series, an NBA Finals record that stood for three decades.

Rick Barry jumped to the ABA’s Oakland Oaks, who offered him a lucrative contract and the chance to play for Bruce Hale, his then-father-in-law, making him one of basketball’s highest-paid players.

His challenge to the reserve clause in his contract went all the way to the U.S. Supreme Court, becoming the first American major-league professional athlete to bring a court action against that clause. Barry would star in the ABA, twice averaging more than 30 points per game. 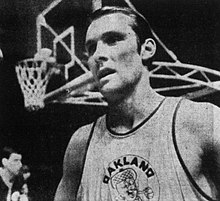 Barry before the 1969 ABA All-Star Game in Louisville, Kentucky

The Warriors went to court and prevented Barry from playing for the Oaks during the 1967–68 season. During the 1968–69 season, Barry suited up for the Oaks and averaged 34 points per game. He also led the ABA in free-throw percentage for the season (a feat he repeated in the 1970–71 and 1971–72 seasons).

Barry played the 1969–70 season with the ABA’s Washington Caps.

The Washington Caps became the Virginia Squires after the 1969–70 season, but Barry never suited up for them).  In 1970, the Squires traded Barry to the New York Nets.

After the Squires dealt Barry to the New York Nets, he made the ABA All-Star team. He repeated as an ABA All-Star during the 1971–72 season. During the 1970–71 season he led the league in scoring (29.4 points per game). Barry led the league again in 1971–72 with 31.5 points per game. In both of those years, he also led the ABA in free throw percentage as he had in 1968–69. Barry also became the ABA record holder for most consecutive free throws in one game with 23.  On October 6, 1972, Barry returned to the Warriors. 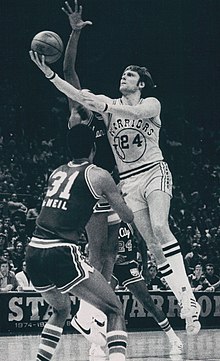 1976 photo of Rick Barry with the Warriors

The Golden State Warriors ran an offense where a forward (Barry) was the primary ball-handler. Two seasons later (1974–75) the Warriors captured the division crown and Barry averaged 30.6 points per game, led the league in free throw percentage (.904) and steals per game (2.9), and ranked sixth in assists per game (6.2). The Warriors executed a four-game sweep of Elvin Hayes, Wes Unseld and the Washington Bullets in the NBA Finals. The Bullets had posted a league-high 60 victories, 12 more than the Warriors total in the regular season. Barry was named NBA Finals Most Valuable Player.

Barry averaged 23.1 ppg in his last season with the Warriors (1977-78) but the team did not make the playoffs and Barry left as a free agent for the Houston Rockets.

Rick Barry ended his career with the Houston Rockets, playing through the 1979–80 NBA season. He pioneered the “point forward” position as a ball distributor (passing for a career-high 502 assists). Barry set a new NBA record (since broken) with a .947 free throw percentage for the season. He retired in 1980.